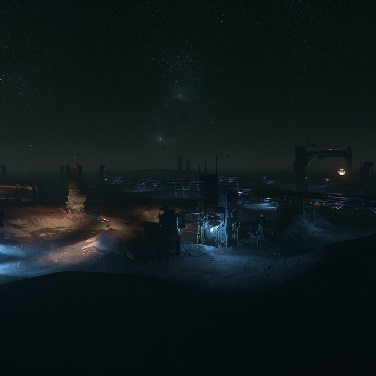 Welcome, everyone, to the third edition of Alpha 3.17.2 Patch Watch! In the first part of this series, we presented some exciting features that didn’t make it onto the roadmap but still managed to sneak into the upcoming release.

In the second part, we examined a concrete example of how implementing new content brings various improvements and fixes that the entire game benefits from.

This week, we want to try something different and talk about how our excitement for your adventures translates into the ‘verse.

To give you the full scope, we need to backtrack a bit. Two racers, Osashes and BlackMaze, were scouting the Stanton system for natural tracks for their community-driven Extreme G Racing (XGR) Stanton Cup.

Just 8km away from the Rayari McGrath Research Outpost on Clio, one of microTech’s moons, they found what they were looking for – a series of canyons from which they designed a thrilling course to challenge any pilot. The Snake Pit was born, with iconic checkpoints like Turn’n Burn, Close Contact, Emerald Avenue, The Pinch, and Drifter’s Paradise.

In a standard Patch Watch, we probably would have just written:
The team added structures around one of the community’s improvised race tracks on Clio, located about 8km from the Rayari McGrath Research Outpost. The goal was to help new players to get into racing by providing clearer landmarks and some visual aids during turns. Our lighting artists also did a great job, so the track can now be raced both day and night.

However, that wouldn’t have done it justice! So we decided to take you behind the scenes and show you how our enthusiasm for your creative ideas, and our shared love for this project, often lead to new events, missions, and locations.

So, why don’t we let our developer Official_Neno speak for themself? Let’s go!

When the Montreal Studio opened up, we started watching many videos from content creators like SaltEMike, Citizen Kate (and Will), Morphologis, SuperMacBrother, and many other French and English streamers on Twitch and YouTube. One of them was BlackMaze. He started a series of videos highlighting the main differences between Star Citizen and other space games, and these videos were very useful to Star Citizen newcomers. As new employees in the Montreal studio, those videos helped us better understand the game, and we shared them with a few colleagues. So, naturally, as the videos started to focus more on racing, we ended up being more exposed to that subject.

At some point, I snuck into the XGR Discord and started attending their races just to better understand how difficult the tracks were, how long they were, their locations, how many racers participated on average, and so on. We wanted to understand what a proper racetrack should feel like, and over time, I started talking to a member of the racing community to get those answers.

The Snake Pit racetrack is actually the fourth track I built but, so far, the only one polished enough to be published to the PTU. Among others, we explored a track around a Javeline crash site, which was my personal favorite, but we never polished it sufficient enough to go live.

But, every once in a while, I get an urge to make a racetrack, and I can’t sleep until I get it done. So one evening, right before we branched the next Star Citizen Alpha build, I started working around the iconic Daymar to look for a new option to add something there. While working on Daymar, BlackMaze sent me his new time trial on their Snakepit track. So, as I had my editor open already, I just decided to check out the track they found in the dunes.

You should know that my piloting skills are still in training, so XGR’s race track surpassed my idea in complexity and length. So instead of starting from scratch, I decided to draw on our racing pros’ experience and recreate a tested and proven track. We saw several opportunities to bring it to the next level, to make it more user-friendly, and to add geometry that would help new players get used to the track and hopefully spend less time learning the turns and give them more time for racing.

However, I didn’t want to break XGR’s iconic track, so I asked BlackMaze if it would be ok for me to play around with it to see if we could improve on a few things. So from there, I decided to spend the evening working on that track, and I showed it off the next day to my lead. Needless to say, he was pleased.

Since we had just branched into a new build and were only a few days from the first PTU release, it was far from anything we would consider a typical mandate to schedule if we wanted to realize it for Alpha 3.17.2. So my leads approached our Art Director and head of studio to show off the track. They loved it too, so they decided to pitch the racetrack to the Star Citizen Art Director and Star Citizen Live Director.

For the next few days, I polished the track in my free time because we still had the derelicts to ship, which was our priority. Luckily, we had some amazing lighting artists and QA testers that jumped in as soon as the track was ready, and with the help of our leads, QA’s excellent feedback, lighting artists, level artists, etc., we were able to push the track to the PTU servers in a matter of days. The support we had from our producer, leads, and heads of studio in Montreal and at CIG was terrific.

The idea of racetracks circulated in the Montreal team since day one. We have members of our Tools team that worked on racing games. We race go-carts together at least once a year as a team-building exercise. We play Forza regularly together. So racing is part of what we love, but we just never officially had a chance to do it in Star Citizen.

Most of us play Star Citizen in our free time, and some of us spectate the races that the community has created. I worked on multiple AAA titles before, but this level of community involvement and how it positively affects the game’s development is something that I was not used to. It is something unique about Star Citizen and something that the Turbulent and CIG teams love. We will keep supporting this, as developing a game this way is a lot of fun and extremely rewarding.

We learned a lot while making this racetrack and, hopefully, we can get more people involved and keep improving the quality level in case there is ever any other track we want to sneak into the game.

I am very excited to see how the reworked Snake Pit will affect the community and what SCR, Atmo, and all the other racing communities are working on.

See you on the race tracks!!