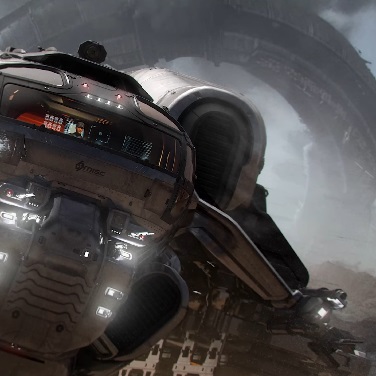 Six separate refineries for six separate raw or combination to improve the velocity.
One man ship with habitation and kitchen area.

What are the benefits of using a refinery ship compared to a station-based refinery?

The most obvious benefit is that you have the refinery on site, meaning you won’t have to take long trips to a station all the time. Another benefit is that the on-ship refining process is planned to take less time than in a station since you will be in full control of the process. You’ll also be unaffected by the refinery station’s occupation level when it’s being used by other players.

Ultimately, we’d love players to come together to form industrial fleets with mining, refinery, salvage, and transportation ships protected by fighters and gunships.

How long will refining take using the Expanse compared to a station-based refinery?

The aim is for it to be a relatively fast, skill-based process. If you know the material that you want to refine and you know how to properly process it, you should be much faster than the big refineries. Also, you’ll be refining much smaller quantities (globally speaking) per job than a station-based refinery would.

Will the Expanse have safe storage for volatile ore? For example, if I put raw Quantanium into the Expanse, will the time-to-destruction halt?

No. The Expanse doesn’t currently have safe material storage, so volatility will not be bypassed by storing it on board. However, it should halt when the refining process begins.

Will there be a minigame for refining like we have for the other professions? If so, can you share any details?

We don’t call it a minigame, since the mechanic will be a little more complex than that, but we have a general idea of what we’d like the player-driven refining process to look like. This isn’t final and is subject to change, but currently the idea is:

First, you’ll pull in the refinery sack from the delivery/mining ship with the tractor beam and attach it to the “intake socket” of your Expanse. Then, you’ll analyze the materials. Based on the findings, you must decide which refining process you want to use.

You’ll pick either a predefined method (with limited direct interaction) or the manual approach, which has you directly interacting with the material through interactions like grinding, melting, dissolving, and more.

Our goal here is to allow you to decide on how much effort you want to put into it. So, you could take the “easy” way and pick a well-known method, or you could come up with your own refining recipe.

Will we be able to begin refining and then store the Expanse via ASOP terminal without interrupting the refining process?

No. The refining process is an active profession so you’ll have to pay attention to it . It isn’t decided yet, but storing the ship could halt the refining process, reset it, or lead to the materials being wasted.

What materials can the Expanse refine?

The current aim is to have every raw/unrefined material be refinable, so all minerals, gases, and metals (including scrap). We’d also like it to refine gases into fuel.

Is it compatible with the Argo MOLE, Greycat ROC, and Drake Vulture?

The Expanse is planned to refine the vast majority of output from the vehicles above. So, it shouldn’t matter where the unrefined material comes from as long as the setup of the refinery matches the material’s refining requirement.

However, we’re still looking into FPS mining and the Greycat ROC, as these methods output gems that might need to go through a different process than refining. But, either way, they’re planned to have a purpose in crafting.

Refining will likely require some use of power, catalysts, and other reagents. We plan to have your refinery be able to craft catalysts and reagents if you have the proper materials to hand.

Will the refineries require power from the ship to operate, thus increasing hydrogen fuel consumption when in use?

Yes, the refinery will be dependent on the ship’s powerplant. This might even impact your ship’s energy balance if you want to run high-energy processes in your reactor.

Why does the Expanse have a single small shield when most ships of this size are better protected?

Due to the energy-intensive nature of the refinery process, the compromise was only having a single small shield to allow the ship to have full shielding while refinery processes are undertaken. However, the Expanse’s current armor is above average for its size class, so the lack of a second shield won’t mean it’s necessarily weak.

Could you explain in broad terms how the “sack” system (where the refined material is deposited) will work?

You might already be familiar with the sacks from the Prospector and MOLE, where you have the storage units located at the side that fill with ore as you mine. They expand as they’re filled and can be detached once full. They can then be picked up by other ships and their contents transferred for further processing.

When the Expanse receives raw ore via a container, does it reuse the same container when delivering the refined materials? Are the Expanse’s six side saddlebags detachable?

Yes, we plan to allow players to reuse the sacks that the raw materials were brought in and refill them with refined materials. The current process is described below, though could differ upon release:

A Prospector delivers you a sack of unrefined materials, which you successfully attach to your Expanse’s intake socket. You can then either move the contents directly to your reactor or store it in one of the sacks on the side of the Expanse to be refined later.

Be careful though, the intake socket has a very weak connection and will not hold the sack in place during travel.

The Expanse’s saddlebags are planned to be detachable, so another ship could potentially pick them up.

What is the total cargo capacity for refined and “needing to be refined” material? Can it process 64 SCU worth of ore but also have an additional 64 SCU in its saddlebags already refined?

Like the Prospector and MOLE, the Expanse utilizes the same folding sack design that allows a second set of pods to be stored on board in a compressed state. By default, there are 8 pods expanded (giving 64 SCU of capacity) and 8 pods compressed above them (giving an additional 64 SCU of capacity once the initial 8 pods are detached). This allows the Expanse to stay in place and offload the initial set of pods to a nearby cargo ship and continue refining a second batch.

Is the Expanse able to hold raw ore “in-waiting” beyond the six jobs it can run at once? If so, will it automatically start new jobs in-waiting without input from the player?

We plan to allow you to store some amount of material directly in the reactor or in the attached sacks. However, it will not be refined until you actively start the process.

Is a system being planned to allow players to charge for ore processing, like when refueling from another player’s Starfarer?

Yes, we plan to have a selling/purchasing system where players are able to sell their unrefined material to the Expanse, which will then be refined and sold on. It will also allow you to add a fee for refining.

The brochure illustration shows pod loading in zero-g via tractor beam. Will this also work on a planet where gravity is a factor?

That is the current plan, yes. 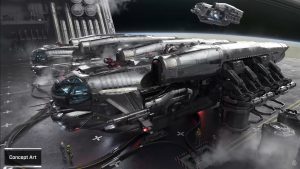 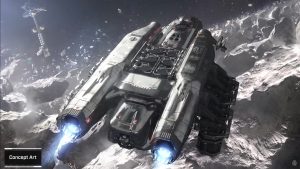 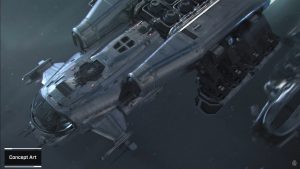 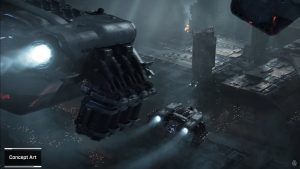 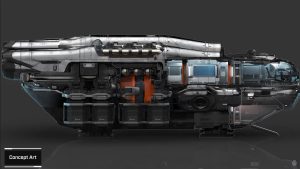 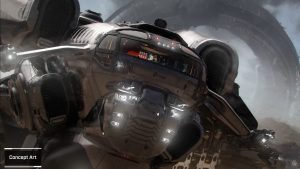 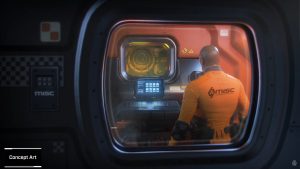 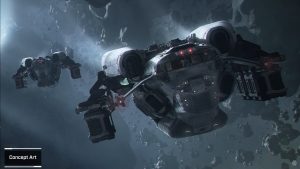