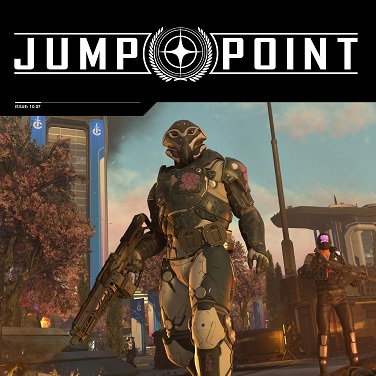 Welcome to July’s Jump Point and, in the ‘verse, Alpha 3.17.2! We hope you’re enjoying the Siege of Orison, increased player cap, derelict locations, new missions, and more! In this month’s issue, we’re looking into the creation of the new Dynamic Event and managed to get time with two of the developers, Lead Designer Luke Pressley and Principle Systems Designer Elliot Maltby. It was a pleasure to learn how much effort and thought goes into creating an event of this magnitude. It’s also clear that, thanks to the huge amount of backend and feature work over the last few patches, content at this scale is far more viable than it was even a year ago. We also have two new articles from our Narrative team in LA: a bio of Maria Wharton of Maria Pure of Heart fame, and an always-fascinating Galactapedia on Yela, Stanton II. We’ll be making some changes to Jump Point over the coming months, so keep an eye out for updates. In the meantime, if there’s anything you’d like to see in your Subscriber magazine, let us know on Spectrum!

Thank you for your continued support